Developped by J.Coron with Qt Open Source Edition version 4.3.3 on Linux and Windows

JcQt4develop (free software) is a simple IDE for Qt4 Open Source on Linux and Window systems.

The version 0.4 has been developped with Qt 4.3.3 Open Source Edition on Linux and Windows

It is composed of two principal parts :

Since the 0.2 version the user is allowed to find easily the errors which are indicated in the compiler messages, by double clicking on the error message : focus is given to the source file where the error occurs, and the cursor is placed at the beginning of the line which is signaled in the compiler's message.

Since the 0.3 version the modified files can be saved automatically before compiling if the user has selected this option.

In this version 0.4 the characters' encoding responds to standard ISO 8859-1 for the texts' editors. 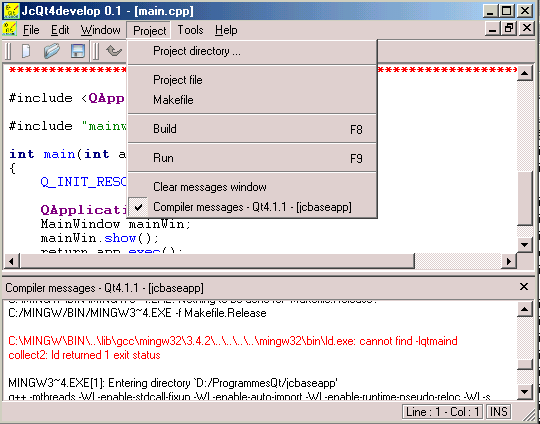 How to obtain JcQt4develop for Linux

Unpack the tar.gz file and follow the instructions in the README file.

At the end of the install procedure, the following files

are copied in the directory /usr/local/jcqt4develop/
The icon can be used to make a link on the desktop.

How to obtain JcQt4develop for Windows

This exe file contains all the files which are necessary to use this software.

A computer with Windows, about 8 Mo free on the hard disk.

NOTA : JcQt4develop has been tested and works correctly on Windows ME and Windows XP

Launch setupJcQt4develop.exe and answer the questions. If you accept the licence's terms, the installation will finish correctly.

If you run into problems

Should you run into problems please report them to the author